​England Women ended their five-game winless run thanks to Beth Mead’s strike on Tuesday, where the Arsenal forward pounced on a mistake from Portugal’s goalkeeper to score the only goal of the game.

It wasn’t the easiest start for the Lionesses as Portugal looked to sit deep and catch England on the counter-attack, with Lyon winger Jéssica Silva often finding joy in behind Phil Neville’s side.

There was little to talk about for England aside from a half-hearted penalty shout from Lucy Bronze in the first-half, and the game largely followed the same script after the break. Substitute Jodie Taylor somehow missed a close-range header after a goalmouth scramble just after the hour mark, but it was her introduction, alongside Jordan Nobbs, that helped give England a much-needed injection of urgency.

A horrific error from Portugal then gifted England the lead through Beth Mead, who just had to tap the ball over the line after goalkeeper Patrícia Morais spilt a looping cross from Alex Greenwood.

The Lionesses could’ve conceded with the last kick of the game as Cláudia Neto’s free-kick hit the underside of the bar, but England held on to return to winning ways on the international stage ahead of their must-win grudge match against Germany next month.

It was essential for the Lionesses to return to winning ways after a run of five games since their last victory, and although Phil Neville’s side dominated the match, they once again lacked any cutting edge in the final third. 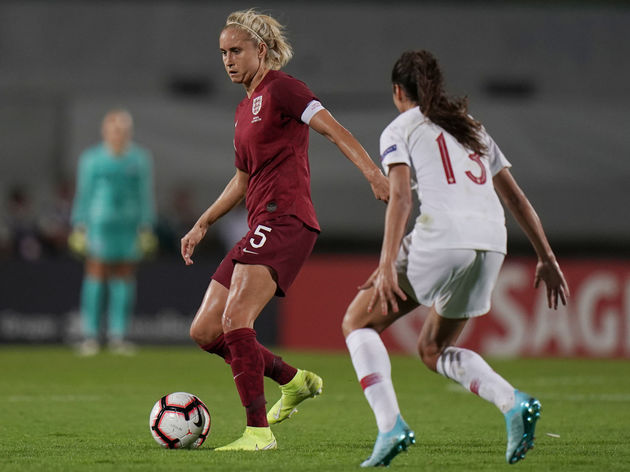 The Lionesses were given almost all of the possession but could do very little with it, ultimately relying on an awful mistake from Portuguese goalkeeper Morais to end their winless run since the World Cup.

She hasn’t always been a regular under Phil Neville, but Lucy Staniforth certainly left her mark on the match – and it could see her become a mainstay for England.

The Birmingham City midfielder was at the heart of almost every attacking phase of play for England and demanded the ball at every opportunity, even though Staniforth didn’t get the rub of the green at times.

Scrappy first half but Lucy Staniforth has been class. England have had a problem trying to find that No.10 and she’s really showing Neville that she can be an option in that position, and a good one at that #PORENG

Staniforth running chasing the ball, kicks it even further ahead of her so she can outrun her marker.

Staniforth continued to make herself available throughout the second-half and was excellent at drawing silly fouls from Portugal, something which helped to spur England on as their five-game winless run finally came to an end.

England have more than a month off but will take to the pitch at Wembley in their next match when they face off against Germany.