A James Milner penalty at the death secured a dramatic, but deserved, 2-1 win for Liverpool and fans were left in admiration of the “mentality giants.” 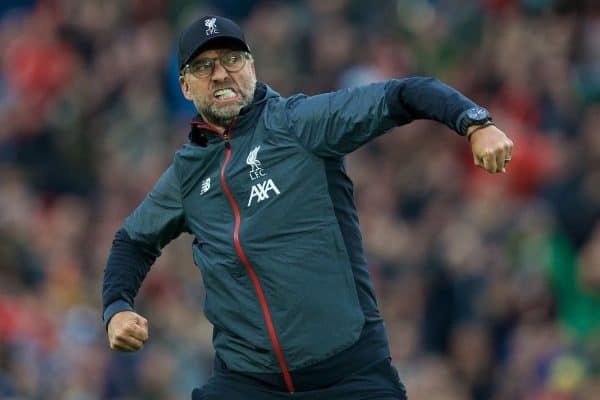 The Reds welcomed Brendan Rodgers’ Leicester to Anfield with the view of maintaining their 100 percent start to the season, and they did that. Just.

Jurgen Klopp‘s side dominated much of the opening half and after initially finding themselves guilty of some wayward finishing, Sadio Mane ensured Liverpool’s superiority was reflected on the scoreboard with a poised finish beyond Kasper Schmeichel.

The second 45 again saw the Reds pile on the pressure but as the minutes ticked by without a second goal the Foxes grew in confidence and capitalised through James Maddison to leave Liverpool with limited time to find a winner.

But as this side has proven time and time again they will find a way, and on this occasion, it was through a stoppage-time penalty from James Milner after Mane had been impeded in the box.

Milner’s ice-cold stoppage-time heroics from the spot were rightly lauded….

How does James Milner do it? 33 years old and he’s still putting in top end performances like that… The man is an absolute machine. One of the best free transfers that this club has ever made.

“Give Milner a contract for life. His experience and calmness cant be quantified.”

James Milner. Bollocks as big as his head.

“Milner ice cool as ever. What a result!!”

To quote Brendan Rodgers, this team has remarkable character. No where near our best but another 3 points on the board. The run continues. Balls of absolute steel from Milner with the late penalty #LFC #LIVLEI

Another first goal from Sadio Mane, he does it so consistently its unreal.

Such an important player for this Liverpool side, maybe the best player in our world class front 3.

Sadio Mané is something else. Has taken his game up another notch so far this season. His attacking prowess is well known but he’s defensively sound as well. Liverpool’s smiling assassin.

Mané’s goal was brilliant, but there’s not another wide forward in world football who makes such a phenomenal defensive contribution as well. Some of those tackles tracking back in that first-half were superb.

“Sadio has grapefruit-size balls to make that tackle in that spot. Amazing.”

– Neukolln on the forums.

“Sadio Mané was unfuckinbelievable today and is probably our most important player right now. Fantastic stuff.

– peter roberts on the forums.

50 – Sadio Mane has scored his 50th Premier League goal for Liverpool. He’s the 10th player to reach the milestone for the club in the competition, more than any other side. Nifty. pic.twitter.com/XvpojW5a9v

Sadio Mane is the best player in the world.

Throughout the three years Sadio Mané’s been at Liverpool, he’s never been better than now. 1v1, clinical finishing, offensive movement, pressing, defensive contribution. He’s been doing it all superbly this season. 8 goals and 1 assist in 11 games is a good testament to that.

That Choudhury is a nasty piece of work. Awful challenge which forced Salah off, and that’s not out of character. Made another horrific tackle on Matt Ritchie a few weeks back, been out for months since.

Choudhury should have got a red card for that foul on Salah. He could have easily broke his ankle.

Really hope Salah is ok. That was an absolutely disgusting challenge that should’ve received more than a yellow imo.

He trapped Salah’s ankle with that challenge. Such a poor tackle. I hope he’s not injured.

Pleased for Dejan Lovren, he’s playing like, well, a World Cup finalist. Funny that. (I know he has to keep it up, but c’mon, give the fella credit where it’s due!) #LFC

Lovren always gets plenty of shit but I thought he was immense today, never put a foot wrong, did everything right

I also note with interest that Lovren did very little wrong, despite all the usual cry-arsing before kick-off.

It could have been a much more comfortable afternoon but for fans, it was yet another example of the Reds’ mental fortitude…

Absolutely massive. European feel ending at Anfield, much more than three points. Stuff like that injects extra life into a campaign. Top of the league. #LFCdigest

This Liverpool team do not know when to stop – 17 wins in a row. Chances missed, mistakes made but the three points is all that matters. Eight points clear for the Reds.. #LIVLEI

Poetry in motion. Get in the unbearable top of the league Reds

Fucking mentality monsters!!! What a side.

Brilliant win that against the best team we’ve played this season, proper dug in after a tough midweek game and won again. Enjoy tonight, up the room of the league Reds #LFC #LIVLEI #PremierLeague

If we’d drawn that match it would have been a travesty. Excellent performance today. #lfc

I’m not saying watching Liverpool puts you through the blender sometimes, but at one point during the second half I involuntarily reached to my left hip to check for a seat belt Anfield doesn’t actually provide.

That would have been comfortable for #LFC if they’d just taken their chances but I suppose it’s much more fun winning with an injury-time penalty. Anfield absolutely rocking after the final whistle – another massive win.

This Liverpool team simply do not give up; they do not lie down. Far superior team today, missed chances, had the sucker punch of Leicester’s equaliser, only to pick themselves up and go again. 17 straight wins now. A testament to the ‘mentality monsters’ Klopp has nurtured.

« Jurgen Klopp angry with “dangerous as hell” foul on Mohamed Salah
Video: Watch the goals and highlights from Liverpool 2-1 Leicester »