Rhian Brewster is content to practice patience in his bid to break into the first team as Jurgen Klopp continues to reiterate his faith in the young forward. 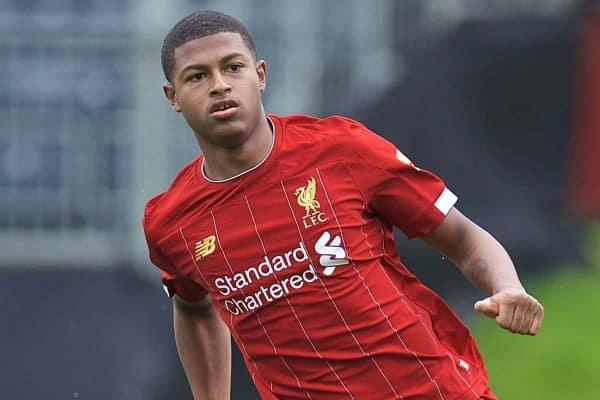 The 19-year-old has two European winner’s medals to his name despite having made just one senior appearance for the Reds, which came in September’s League Cup win over MK Dons.

And while first-team action has proven hard to come by for Brewster, his place in and amongst Klopp’s matchday squads domestically and in Europe continues to solidify the view that the youngster remains on course to be the next academy graduate to entrench himself in the senior set up.

Displacing Mohamed Salah, Roberto Firmino and Sadio Mane would prove to be an uphill battle for an experienced professional let alone a teenager continuing to hone his craft, yet Brewster’s confidence in his own ability ensures he is prepared to play the waiting game.

“You’ve just got to be patient and wait for your turn,” Brewster told Sky Sports.

“Obviously the boss has a plan for me and he knows what he’s doing, clearly!

“Chatting to him, he says, ‘Just be patient, your time will come, it will happen.’ And I’m just waiting. I’m being patient.”

Having sustained a serious ankle injury in early 2018 which kept him out of action for over a year, patience will not be new for Brewster.

And coupled with the faith and belief of Klopp and his support staff, including Pepijn Lijnders who previously labelled him the “complete striker,” the 19-year-old is relishing the challenge before him at Anfield.

Mindsets which no doubt established a vote of mutual confidence between all parties and saw Klopp deny Brewster a temporary move away from the club over the summer, a decision which the England youth international is taking as a positive indication for his future.

“He said ‘no’ [to a loan move] straight away. Obviously that is evidence that he has great faith in me and wants to push me towards the first team,” he continued.

“It’s hard to get game time because the front three, they are all amazing players; it’s going to be difficult but you’ve just got to keep going and going.”

In addition to his single appearance to date and being named in the first team’s matchday squad on a further two occasions so far this season, with another likely to follow against Arsenal in the cup, Brewster has turned out six times for the academy, netting three goals.