Croatian midfield maestro Ivan Rakitic has put a host of European clubs including Man Utd on notice after revealing that he may seek an early exit from his Barcelona contract is his playing time does not improve.

Rakitic has been a constant source of class, control and creativity in the Blaugrana midfield since his arrival from Sevilla in 2014 – his performances instrumental in guiding the club to four La Liga titles in five years.

But after a turbulent summer on the transfer front in which Barcelona were persistently linked with a mega-money move for former forward Neymar, Rakitic was one name who was constantly mentioned as a possible sacrificial lamb to free up cash for the ambitious move.

That development seemed to signal an end to the days of the 31-year-old being a crucial cog in Barca’s engine room, with head coach Ernesto Valverde awarding Rakitic just 156 minutes of game-time in the league this season.

The 104 times capped Croatia international was then left out of the squad altogether to face Sevilla prior to the international break, leading to the midfielder putting a number of Europe’s elite clubs on high alert following his latest comments.

“I don’t know what will happen now,” Rakitic said via Goal.com. “It’s tough because I want to play and not just be part of the team. I will do everything possible to change my situation. 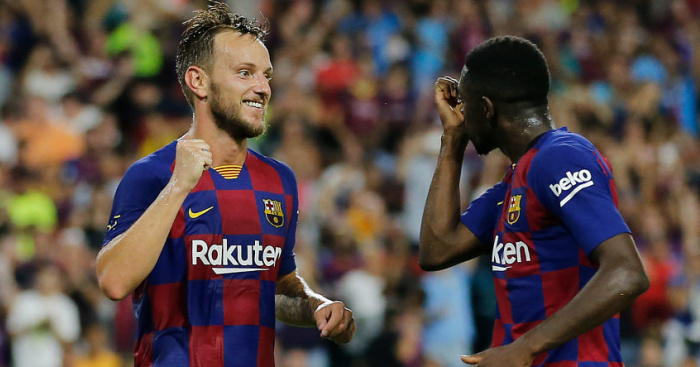 “I have two years left on my deal and there’s no better place to play than Barcelona, the best club in the world, but I need to play and not just enjoy walks around the city and the beach.

“I spoke with people at the club, everyone knew I had other options.

“I want to fight so that the team see me ready to deliver on the pitch. I want to thank the fans for the affection they showed me this weekend, but if nothing changes, we will have to sit down and talk about my situation again.”

The article goes on to state that Serie A heavyweights Juventus and Inter have registered interest in the superstar, but one club who could reignite their interest is Ole Gunnar Solskjaer’s Manchester United.

The Red Devils were reported to be keen admirers of the Croatian over the summer, though a move failed to materialise before the window slammed shut.

Utd have altered their approach to the transfer window recently, opting instead to sign young players with a view to developing them into superstars, but many, including Man Utd legend Gary Neville have spoken of Utd’s desire to bring in top quality experience to nurture the blossoming talents of Daniel James, Marcus Rashford and Mason Greenwood, among others.

Meanwhile, Man Utd have been given a lift in their efforts to sign an £89m-rated England sensation.