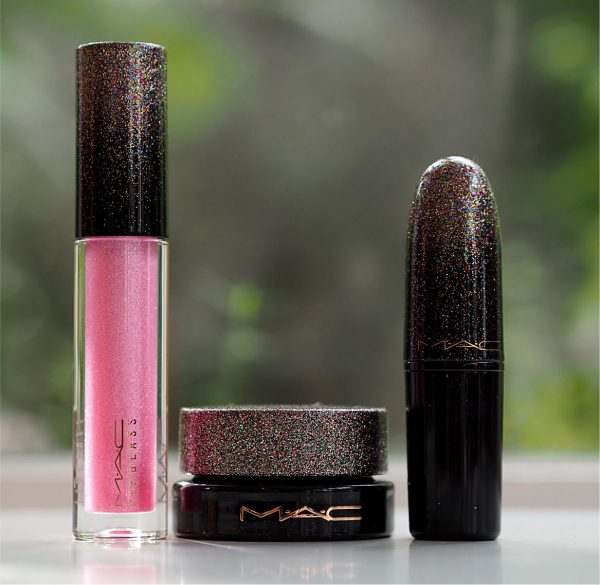 [productsamples] Starring You is the seasonal collection from MAC and it’s ALL about shimmery, twinkly looks that light up the lids and lips. There’s a gifting collection coming out too but for now, these are the separate products to get you in the party mood. Everything launches on 24th October.

I’m really drawn to anything with stars so this lipstick ticks all the boxes for me, design wise. There are six shades – including a blue! – and as you’d imagine they’re awash with twinkly glints. This colour is Kiss of Stars. Actually, I should say that this packaging is amongst the most beautiful I’ve seen from MAC – it really catches the light with a glitter ombre and looks like it should have texture but is a smooth as a pebble.

Remember when magnetised lacquer was a thing? Nail polish that you could swirl with a magnet to create different looks? MAC brought out these rippled, magnetised shadows last year – or perhaps the year before – and it honestly hasn’t got old that the ripples go back into the same position no matter what you do it. Perhaps I’m just easily pleased – this shade of Spellbinder Shadow, which swatches so much lighter than it looks in the pot, is called Stars Align, and comes out a soft silver. Lipglass is really MAC’s thing – if you’re a gloss fan and a sparkle fan, you’ll love the level of iridescent gleam in this (sorry, I don’t have a name for it – I’ll update as soon as I do).

It’s ages since I’ve reviewed any MAC so I’d temporarily forgotten about the vanilla smell in the glosses – I wish they’d tone it down just a tad although I know that many people absolutely love it. But, I haven’t forgotten the way that it stays put on the lips for longer than most. This pink is super frosted but if you use sparingly, it doubles as a top coat over other colours.

As you’d expect, there’s highlight galore – this starry opalescent powder is called Rising Star and is a bronzer/highlight hybrid; there is also a champagne shade for paler tones.

I could swear the Engraved Powerpoint Eye Pencil has shimmer in it – it looked glimmery when I took the lid off but the swatch and subsequent other skin scribbles don’t reveal any glittery bits. Perhaps a rogue twinkle got in there somehow! Either way, it’s a nice enough, deeply black liner that ticks all the boxes it needs to.

I’ve taken the light down a bit in this swatch so that you can see the shimmer better: from bottom to top, the pink Lipglass, Engraved Powerpoint Eye Pencil, Kiss of Star Lipstick, Rising Star Opalescent Powder and Stars Align Spellbinder. Anything catching your eye for the party season?