Liverpool’s dramatic 4-3 victory over Salzburg on Wednesday night provided another reminder that no Champions League clash can be taken lightly. 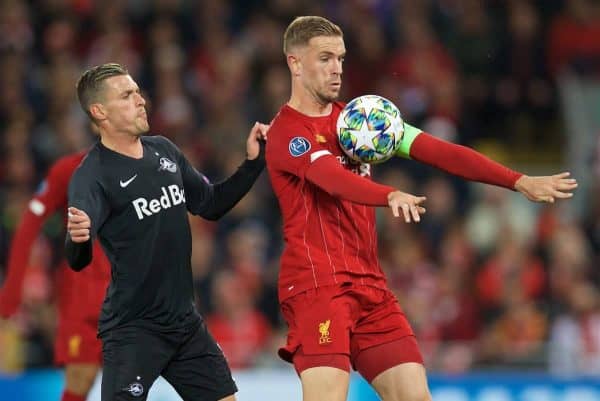 Mad nights of European football under the Anfield floodlights are the most modern-day Liverpool thing ever.

Personally, I’d be worried if we didn’t have a couple of them a season.

While Jurgen Klopp can feel rightly compelled to point out to his players what did and didn’t go well on Wednesday evening, even he seems to have quantified with himself that a win is a win.

And as games go, it was a lot of fun against Red Bull Salzburg.

Product placement in football is an unsettling concept. Salzburg—just as is the case with RB Leipzig—is a forward-thinking football club.

They are clubs that are brave enough to implement long-term and far-reaching projects, yet they are also clubs which are shrouded in controversy.

Those projects in Salzburg and Leipzig are peculiarities: hypnotic on the pitch at times, jarring off the pitch.

For every fleet-footed attacker, powerful midfielder and assured defender they cultivate, I can’t help but see, in my mind’s eye, the image of Jesse Marsch and Julian Nagelsmann piloting and navigating a novelty energy drink can soapbox racer down a steep incline at excessive speed, or riding an overly decorated bicycle off the end of a seaside pier somewhere in Sussex.

Will we be seeing an English version of this phenomenon one day?

Do we get an Italian variant at some point? Anyone for Toro Rosso Bari? Sebastian Vettel to sign for them in a blaze of publicity one day?

Other energy drinks are available though.

This game was a surreal one; this game was roughly played out in three overlapping 30-minute chunks.

In the first 30, this is where we produced a white heat of football. Alchemy of the inflated ball, where I was seriously considering the possibility that we just might score 10.

A sense of immense pride, amusement and bemusement was engendered. The passing, the movement, simply some of the best I have ever seen a Liverpool team produce. Andy Robertson even managed to score a goal.

Then came the second 30, where Salzburg came storming back into the picture.

It was as if a switch had been flicked. Klopp had urged caution about the capabilities of Salzburg, he had flagged up the dangers they possessed.

DJ George set the scoreboard to 3-3 after Salzburg’s first goal. There and then I knew something ridiculous was about to occur.

On the concourse of the Upper Main Stand prior to kickoff I had stood and watched the closing half-hour of the Genk vs. Napoli game.

Our loss to Napoli on the opening night, plus Genk conceding six at Salzburg, shouldn’t have really equalled a goalless draw in Belgium.

Liverpool shooting into a 3-0 lead at Anfield had a sense of both entitlement and disorientation about it.

We were overpowering Salzburg, but you can’t score six in a Champions League fixture and not boast a sting to the tail.

We will all look at the return game with a little more suspicion after this one, with the need to have qualified for the knockout stages before we head to Austria that touch more imperative.

In the final 30-minute segment the introduction of James Milner settled us down, so we could claim the winner at 4-3.

Poking Salzburg’s product placement association alongside Red Bull with a pointy stick aside, I’m going to enjoy watching them play against other teams.

I hope it is us and they who progress from Group E.

Given our travails against Napoli and Salzburg, we will have to take advantage of Genk during the next two games, without taking them lightly.

‘That third kit of ours is a bit Genk, if you ask me’. ‘I can’t believe he missed that one-on-one with the ‘keeper, he absolutely Genked it’.

Ultimately, Tuesday and Wednesday gave us 24 hours of madness between Liverpool and Spurs’ respective games. Sort of like the second leg of the semi-finals last season, but in reverse.

Ten goals conceded between the two teams and on-pitch happenings that scorched the mind, via disbelieving eyes.

How dull these group stages are eh?

Brendan Rodgers returns to Anfield on Saturday. The first time our paths have crossed since he departed Anfield to make way for the dawning of the Klopp era.

Hopefully, we have got the urge for a slack defensive performance out of our system now, as we know all too well that Rodgers can make his teams dance to a bewitching tune.

The past vs. the present, it has the potential to be a stunning afternoon of football.

It will also be the last game before the second international stoppage of the season.

Respect needs to be given on the pitch and in the stands.

Minimal changes to the lineup, bar perhaps the return of Joel Matip and a start for Naby Keita, to allow the players on duty on Wednesday to get Salzburg out of their psyche, before heading off in their myriad international directions.