A Liverpool journalist has claimed Fenway Sports Group were left frustrated with Brendan Rodgers’ “schtick” in the months leading up to his dismissal in 2015. 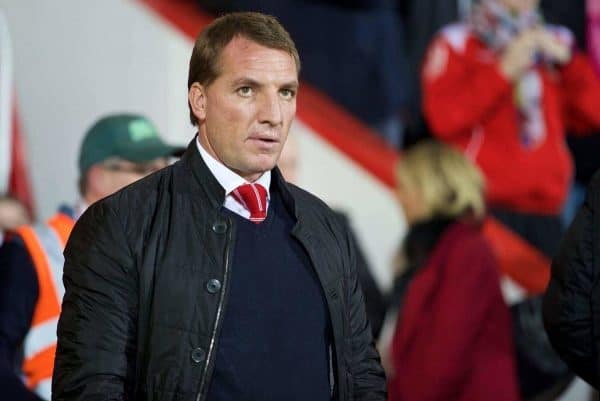 Rodgers returned to Merseyside last weekend as his Leicester side lost 2-1 at Anfield, with the Reds’ dominance a reminder of their progress since his sacking.

Jurgen Klopp was appointed his successor in October 2015, and has maintained a strong, healthy relationship with FSG since, with all parties largely in agreement over matters both on and off the pitch.

The same could not be said of Rodgers, whose reputation at the club soured over the years, with the Independent‘s Tony Evans claiming his public persona jarred with the owners’ ideals.

It has long been known that the manager and Liverpool’s transfer committee failed to see eye-to-eye on a number of signings, and Evans claims FSG “were convinced that Rodgers favoured English players.”

He names Adam Lallana and Rickie Lambert as additions who “did not engender much confidence in Boston,” while they were “frustrated” by his “reluctance to play” the likes of Emre Can and Lazar Markovic.

“After a 3-0 defeat at Old Trafford in December, they gave him an ultimatum: get the likes of Can into the side or pay with your job,” Evans wrote.

This prompted a switch to a 3-4-3 formation, with Can installed as centre-back alongside Martin Skrtel and Mamadou Sakho, and the Reds went on a 13-game unbeaten run in the Premier League.

But this reportedly came after “heavy pressure” from FSG president Mike Gordon to “move Rodgers away from his favoured 4-3-3 and 4-4-2 formations,” which jarred with his proclamations of a “‘eureka’ moment” to journalists.

Evans’ claims paint Rodgers as a manager who would say one thing to the club’s owners and another, completely opposite thing to the press.

This came with signings, too, with FSG feeling they were “thrown under the bus” with his comments on the departure of Andy Carroll in 2012 and the failure to sign Mohamed Salah in 2014.

Salah joined Chelsea at the start of 2014, after the Reds were out-priced by Basel.

Evans suggests Rodgers was “lukewarm” about the Egyptian and had “argued against” the Swiss side’s valuation, but in public he blamed the club’s “money guys” for a move he found “hard to take.”

Remarkably, the journalist then claims an “internal missive” came from FSG: “I’m fighting the urge to call him and tear him a new asshole.”

Whether wholly accurate, Evans’ report certainly depicts Rodgers in a poor light, and would vindicate FSG for parting ways with the Ulsterman as they felt his “schtick was getting old.”

Either way, Liverpool have fortunately moved on now and so has their former manager, who remains in a strong position to lead Leicester into the top-four race this season.