In three out of five Indian Super League (ISL) editions, the end-of-season award for the ‘Emerging Player’ has been won by a Kerala Blasters player.

Sandesh Jhingan impressed with his stellar displays in defence in the inaugural edition, Lalruatthara was solid as a full-back two seasons ago and Sahal Abdul Samad’s rise to fame is already well-documented by now. The club that has given chances to these Indian players needs a few more of the same mould to perform now more than ever.

As Kerala Blasters prepare to take on ATK in the season opener on October 20, Dutch gaffer Eelco Schattorie finds himself in a spot of bother. Several key players including Spanish duo Mario Arques and Sergio Cidoncha picked up knocks during pre-season.

The primary concern for the team will be in defence, wherein Gianni Zuiverloon and Jairo Rodriguez have struggled with fitness and Sandesh Jhingan, the team’s defensive stalwart, has been ruled out for the season with an Anterior Cruciate Ligament (ACL) injury that requires surgery. The likes of Zuiverloon and Rodriguez have taken part only in a few pre-season matches.

In the midfield, Arjun Jayaraj’s signing offered a lot of promise but it soon met an abrupt end as the former Gokulam Kerala midfielder had to be excluded from the squad due to an injury.

While the situation isn’t ideal and is likely to hamper the team’s chances early on in the season, it opens the doors for fringe Indian players to prove their mettle in the first team.

Blasters have roped in a strong group of foreign players who have tasted success in Indian football. But there are several Indian fringe players who need to put in improved shifts this season. Anas Edathodika’s departure to ATK in the summer has meant that Blasters will have no other option but to rely on less established players.

Jhingan’s replacement Raju Gaikwad will be under pressure to perform straightaway and while Abdul Hakku’s injury record and Lalruatthara’s performances since winning the Emerging Player award are concerning, these are the players who have to take their chances. The latter is also on his way to recover and has not yet reached full fitness. 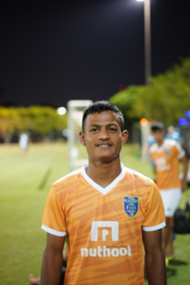 With the injury concerns, players like Rahul KP and Jeakson Singh will also have a prominent role to play at the start of the season,

Youngsters Mohammed Rakip and Prasanth Karuthadathkuni will go into the season with a point to prove. Both these players have shown glimpses of their potential but have not been consistent enough. Pritam Singh has had a limited role to play at Blasters since joining and the full-back, along with Goan Jessel Carneiro, are players who have to step in when required.

“I’ve had some injury problems last season but now I’m back and I have to perform. The coach and the team management might have found something in me to keep me in the squad. I want to make a good impression,” Prasanth told media ahead of the season opener.

A few of these players, including the 22-year-old winger, are in the final year of their contract and it is going to be a make-or-break season for them. If they don’t do well, they might as well pack their bags. And there is no better stage to impress than when the team is desperately in need.