​Matt Targett fired home a stoppage-time winner to give Aston Villa all three points against a resolute Brighton side, who played more than half of the match with ten men.

The Seagulls had earlier taken the lead through Adam Webster, who found himself unmarked at the back post before expertly heading in a Pascal Groß free kick from the right.

It was an opening 45 minutes that the Seagulls largely dominated, with their technical midfielders overwhelming Villa, but the sending off of Aaron Mooy – who was shown a second yellow card for a challenge on Jack Grealish – was ultimately a turning point.

Momentum swung massively in the home side’s favour, and they controlled proceedings between the sending off and half time. Conor Hourihane had a goal ruled out after Wesley was judged to have fouled Maty Ryan in the build-up, before Grealish equalised in first half stoppage time from a move that was heavily influenced by the Villa captain.

Whilst the visitors regrouped in the second half and looked to hit Villa on the counter, the home side, unsurprisingly, looked the more threatening and the likes of Hourihane and Anwar El-Ghazi spurned golden opportunities to give them the lead.

90+4 – Matt Targett’s strike in the 94th minute was Aston Villa’s first winning goal scored in the 90th minute or later of a Premier League game since Christian Benteke against West Brom in March 2015. Scenes.

Their persistence did, however, pay off in the end as Matt Targett struck home the winner viciously with the last kick of the game after Grealish had smartly slipped the full-back in behind the Brighton backline.

Dean Smith will be thrilled with his team’s ‘never say die’ attitude after struggling in the first 30 minutes. Mooy’s dismissal undoubtedly gave them a boost, but they failed to create anything of much substance in the second half after Brighton had shaken off a tricky spell before the break.

Despite it not being their best performance, Villa ground the Seagulls down in the second period and were eventually rewarded with Matt Targett scoring just his third goal in senior football in the dying embers of the game.

Jack Grealish was at the heart of everything that went right for Villa.

Once again, Jack Grealish just on another level to everyone on the pitch. Goal, assist, cute/clever passes and mazy dribbles everywhere. Calm and composure to slip Targett in for a last-minute winner. #AVFC

In a fantastic display, Grealish would’ve come close to covering every blade of grass at Villa Park as he demonstrated his ability to play as en effective box-to-box midfielder.

In possession, he was creative and direct, whilst out of it, he was nothing short of a workhorse, tracking back to win back the ball in his own box countless times.

After scoring his first goal at Villa Park in the Premier League, Grealish was instrumental in Villa’s winner – playing an incisive through ball to Targett, who sent Villa Park into overdrive.

Aaron Mooy’s sending off was an absolute killer for Graham Potter and his men.

The visitors dominated the opening exchanges, as Villa couldn’t live with their four technical central midfielders being deployed across the midfield, a ploy that caused Spurs all sorts of problems two weeks ago. 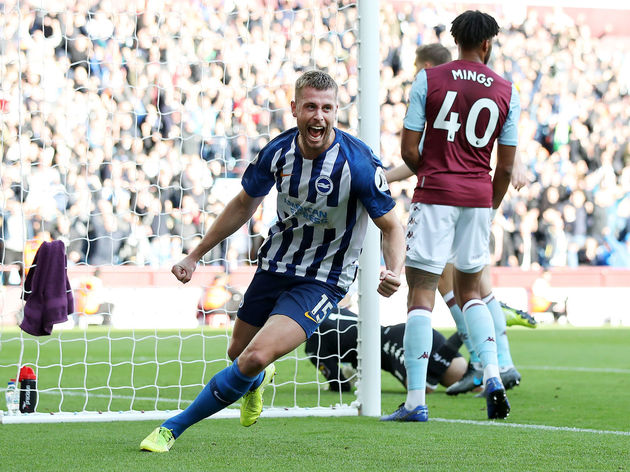 After taking a deserved lead, the Mooy dismissal allowed Villa a route back into the contest and the home side equalised just as the opening 45 was about to come to a close.

In the second period, Brighton changed to a 4-4-1, looking to hit the home side on the break. Montoya and Maupay had good enough chances to give Brighton the lead, but Villa’s pressure paid off in the end, bringing the Seagulls back to reality.

The 30-year-old was able to dictate the tempo throughout in central midfield, despite his side going down to ten men in the first half and Villa possessing three energetic midfielders. Stephens was consistently an option for every Brighton player on the pitch, making subtle movements to create a little bit of space for himself so he could get on the ball as much as he could.

His ball retention was superb throughout and was able to play through the Villa lines with relative ease, playing off one or two touches constantly.

Dean Smith’s side have the easy task of travelling to Man City next weekend, as they appear on TV in the Saturday lunchtime kick off.

After Saturday’s disappointment, Brighton host Everton next weekend, with the Toffees revitalised after their 2-0 win over West Ham.