The former Newcastle and Manchester United star, who underwent a lifesaving kidney transplant in 2017, is third on the all-time Premier League list of goalscorers. 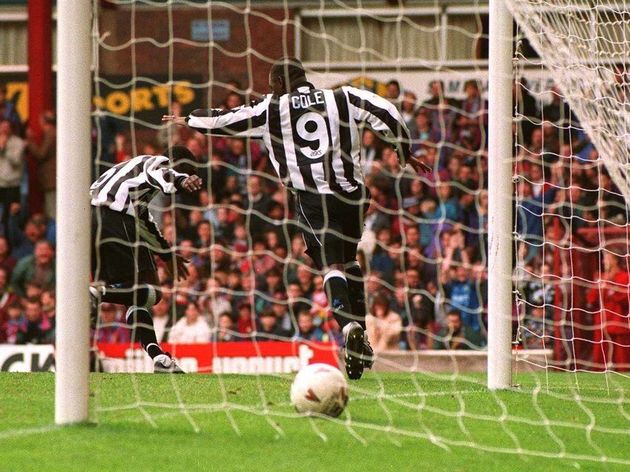 Born in Nottingham, Cole joined the youth ranks at Arsenal upon leaving school in 1988, but he wound up dropping down the league ladder to Bristol City after failing to make the grade. It was then that he landed with Kevin Keegan’s Newcastle, who secured promotion to the Premier League in 1993 at the end of the new division’s inaugural campaign.

Cole had been prolific in the second tier, scoring 12 goals in 12 games immediately after signing for Newcastle, and that momentum continued at pace in the Premier League.

In his first year of top flight action at the age of 22, Cole plundered 34 goals – he remains one of only eight players to score 30 or more goals in a single Premier League season – and scooped the Golden Boot ahead of Blackburn’s Alan Shearer as Newcastle finished third.

He was also named PFA Young Player of the Year. Cole revealed in 2010 that things hadn’t been quite right at Newcastle after a falling out with Kevin Keegan as early as October 1993, resulting in the player going AWOL for a few days and missing a league cup tie against Wimbledon.

Even so, when news of a British record £7m transfer to Manchester United broke in January 1995 it came as a big shock. The Old Trafford club had agreed to pay £6m in cash, while also sending teenage winger Keith Gillespie, valued at £1m, in the opposite direction. Cole had a difficult first 18 months at Manchester United and was heavily criticised for failing to convert two chances in an infamous game against West Ham on the final day of 1994/95 that would have handed his new club a third consecutive title.

But Cole still finished his debut half season with an impressive 12 Premier League goals, mainly as a result of becoming the first player in the division’s history to get five in a single game.

That stunning feat was achieved in February 1995 during United’s record Premier League win over Ipswich, hammering the Suffolk side 9-0. Cole returned to being United’s primary goal threat in 1997/98 after the shock early retirement of Eric Cantona and netted 25 in all competitions that season. But things got even better when Dwight Yorke’s arrival gave birth to an incredible partnership.

“When we started playing together, it was like meeting a special woman and falling in love. Everything felt right. We never had a cross word. If I was upset with him or he with me, we’d look at each other and say, ‘OK’,” Cole told FourFourTwo in 2017.

Between them, the pair scored 53 times, and their near telepathic understanding was best summed up by an iconic goal in a famous 3-3 draw at Camp Nou that saw a seamless dummy and one-two with Yorke utterly bamboozle the Barcelona defence. Cole was part of the United team that created history in 1998/99 when they were the first, and still only, English club to complete a Premier League, FA Cup and Champions League treble.

Cole had played a huge role all season, but it was his composed finish on the final day of the league season against Tottenham – plucking the ball out of the air, taking a touch to set himself and lifting it over Spurs goalkeeper Ian Walker – that sealed the first leg of the treble.

He later started both the FA Cup final against former club Newcastle and the Champions League final against Bayern Munich at Camp Nou. Cole collected further Premier League medals in 1999/00 and 2000/01, reaching a century of goals in United colours during the former campaign.

He had already scored his 100th Premier League goal, including 43 for Newcastle, in United’s famous 8-1 thrashing of home-town club Nottingham Forest in February 1999, but Cole got his 100th for United (all competitions) against Wimbledon in February 2000.

Cole eventually finished on 121 goals for United, one of only 21 players in the club’s 141-year history to reach the century milestone, while he remains 17th on the club’s all-time scorer list. Law had finished his United career with 14 goals in Europe’s elite club competition, netting his last at that level in 1969. Cole began the Anderlecht game level, but 90 minutes later he had smashed the record by taking his tally to 17. He eventually ended on 19. With the £19m arrival of Ruud van Nistelrooy in the summer of 2001, Cole’s chances at Old Trafford began to diminish and he secured an £8m transfer to Blackburn a few months later, leaving Manchester with five Premier League titles, two FA Cups and the Champions League.

Cole was a success at Ewood Park, where he would later also reunite with Yorke, and collected the only domestic trophy missing from his collection in the shape of the League Cup.

Blackburn won the 2002 final against Tottenham at the Millennium Stadium, with Cole himself scoring a second half winner to secure a 2-1 victory. In his final journeyman years, Cole played for Fulham, Manchester City, Portsmouth, Birmingham, Sunderland and Burnley in the Premier League and Championship. But in 2008 he accepted an offer to return home and play for Nottingham Forest.

His late grandfather had been a fan in the days of Brian Clough and Cole could finally fulfil a promise: “I’ll play for Forest one day.”

He played just 11 games and didn’t manage to score, but that almost doesn’t matter.