Bangladesh’s performance since the beginning of this millennium has been average. The Bengal Tigers have consistently remained below 150 in the FIFA rankings for the most part of this millennium except for 2006 and 2009 when they attained 144 and 149 rankings respectively.

The worst phase of Bangladeshi football came in between 2016 to 2018 when the team slipped below 190. Under Belgian coach Tom Saintfiet in 2016 June, Bangladesh suffered one of their worst defeats in history during the AFC Asian Cup 2019 qualification play-off round 1.

Bangladesh managed a goalless draw at home against Bhutan and then succumbed to a horrific 0-3 defeat against the Dragon Boys and crashed out of the qualification round.

Their fortunes changed in 2017 when they appointed British-Australian coach Andrew Ord, a specialist in youth development, to rebuild the Bangladeshi team.

Under British coach Jamie Day, who was appointed last year in May, Bangladesh reached the second round of World Cup 2022 qualifiers by beating Laos 1-0 in aggregate.

Bangladesh have enjoyed a good run of form so far in 2019 under the tutelage of Jamie Day. They have played a total of seven matches in this calendar year out of which they have won four, drew one and lost twice.

Jamie Day’s men started the year with a 1-0 win over Cambodia in an international friendly. They then faced Laos in the round one of the World Cup 2022 qualifier where they won 1-0 away from home and drew in Dhaka to confirm their berth in the second round of the qualifiers.

The Bengal Tigers played two friendly matches against Bhutan on September 29 and October 3 and they won both the games convincingly 4-2 and 2-0 respectively.

Their start to the second round of the World Cup 2022 has not been the best as they have lost their first two matches. They started off the campaign with a 1-0 against Afghanistan away from home and then succumbed to 0-2 defeat on October 10 at the hands of reigning Asian Cup champions Qatar in Dhaka.

While their performance in the World Cup qualifiers has not been the best but they can surely draw inspiration from their result against the mighty Qataris ahead of facing neighbours India on October 15.

LESSONS FROM THE PAST

India enjoy a very healthy track record against their neighbours Bangladesh. The two teams have locked horns 28 times in the past out of which the Blue Tigers have emerged victorious on 15 occasions. 11 matches have ended in a tie and Bangladesh have won only twice. India have scored at least three or more goals on four occasions.

Bangladesh had last won a match against India way back in 1999 in the SAFF when the Bengal Tigers defeated India 1-0. The last two encounters of these two teams had ended in a 1-1 and a 2-2 draw respectively.

Bangladesh coach Jamie Day, an Arsenal academy graduate, began his professional career with the Gunners in 1997 but left the club after two years due to lack of playing time. He began his managerial career with Welling United in 2009 where he was appointed as the player-manager.

Although the young British coach started his playing career under the legendary manager Arsene Wenger, Day has his own philosophy that he tries to implement with his teams.

Day prefers to field the Bangladeshi side in a typical English 4-4-2 formation with skipper Jamal Bhuyan at the pivotal central midfield role. 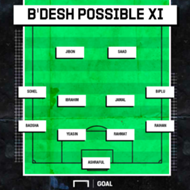 Jamal Bhuyan: Born and brought up in Denmark, Bangladesh’s captain Jamal Bhuyan is the second-most capped player in the Bangladeshi squad which will travel to Kolkata to take on India in the World Cup 2022 qualifier.

An FC Copenhagen youth product, Bhuyan returned to the country in 2013. Since then he has plied his trade at three different clubs namely Sheikh Jamal Dhanmondi, Sheikh Russel KC and Saif Sporting Club. The Bangladeshi skipper had scored the historic winning goal for the U-23 team last year against Qatar’s U-23 side which had helped his team to reach the round-of-16 of the Asian Games 2018. This was the first time in history that The Bengal Tigers had reached the knock-out stage of the Asian Games.

Mamunul Islam: 30-year-old midfielder Mamunul Islam is the most experienced player with 60 international caps in the Bangladesh side. In a relatively young team, Mamunul is only the player who is 30 years or above.

Mamunul has the experience of playing in India on two occasions in the past. In 2013 under his leadership, Bangladeshi club Sheikh Jamal Dhanmondi had won the prestigious IFA Shield in Kolkata defeating all three city giants. The midfielder had also plied his trade in the inaugural edition of the Indian Super League (ISL) for Kolkata-based side ATK. Thus Mamunul’s experience of playing in Kolkata before would, therefore, be handy for his team.